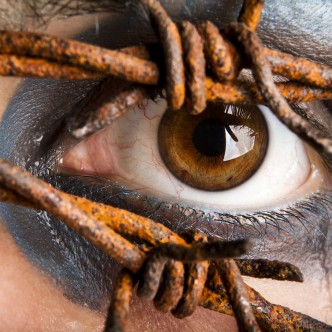 And they will nail me to the tree, Festival de la Chaise-Dieu, Ateliers des Arts, Le Puy-en-Velay

“What is for sure is that the creation coproduced by the Akadêmia ensemble and the La Chaise-Dieu festival, first performed on Tuesday evening at the Ateliers des Arts at Puy, will remain the event of the 48th edition, maybe even beyond, if nothing as audacious is presented in the coming years. (…)
With this creation, as we saw it, it is not so much the text in its totality and precision that counts. What is important is the living expression of a narrative about a man who is to die. And the modernity of this work lies in the opening up of the content of a Passion that nonetheless remains unchanged”.

“Bach’s Passions open on to a new world.

A text by Jean-Pierre Siméon infiltrates the excerpts of Bach’s Passions, interpreted by the Akadêmia ensemble. Jean-Pierre Jourdain is the stage director. The work is coherent, sensitive, humane, and deeply memorable. (…)

Sometimes we see Clotilde Mollet’s face. There is something of a feeling of universality before this face and its two fixed eyes deux billes noues that are looking only at you. The actress is lost between illumination and despair, strength and resignation. She is witness to the suffering and death of Jesus Christ. She does justice to Jean-Pierre Siméon’s text. Her silences are remarkably intense (…)

Françoise Lasserre goes far beyond our expectations. The sounds are raw, like flesh still saturated with blood. This is a powerful image, but not as powerful as this admirable music that rises towards the heavens yet remains deeply human. Those who were not completely satisfied, with what they have heard of Bach’s Passions, and even those who thought they were, will never forget this one.”

“Festival de La Chaise-Dieu : the gem of humanity has found its setting.

The poetic fervour of Jean-Pierre Siméon’s text sheds a new light on the account of a Passion that we can believe is new. It reveals to the lazy or slumbering ears, the drama and beauty of the last instants of Jesus Christ’s life on earth; here he is more the son of man than the son of God. Ideally incarnated in the actress Clotilde Mollet, who never oversteps the limits, this combination of clarity, depth and spontaneity is an opportunity to question one’s faith all over again, to question oneself about the meaning of a sacrifice that shook the world and, solely in terms of the music, to connect your eyes and heart directly to the source that inspired Bach’s genius. All or some of it will definitely touch you. Akadêmia’s project, led by Françoise Lasserre, in coproduction with the Festival de La Chaise-Dieu had been performed in 2014 at the Ateliers des arts auditorium in Puy.

Revived this year in the nave of the Abbey, at the foot of an impressive Christ on the Cross, this show confirms the words of the stage director Jean-Pierre Jourdain “Bach, this wonderful centre around which we should create theatre”. His humanity is reinforced by his contact with the religious, and this majestic heritage, as are Akadêmia’s sounds, which were both raw and gentle.

Although it stands at the crossroads of so many worlds, Bach’s Passion reveals itself to be more coherent and sensitive than ever.”